HRF demands comprehensive inquiry into the death of Tahsildar Nagaraju

Do not interfere with Aadivaasi lands: HRF demands 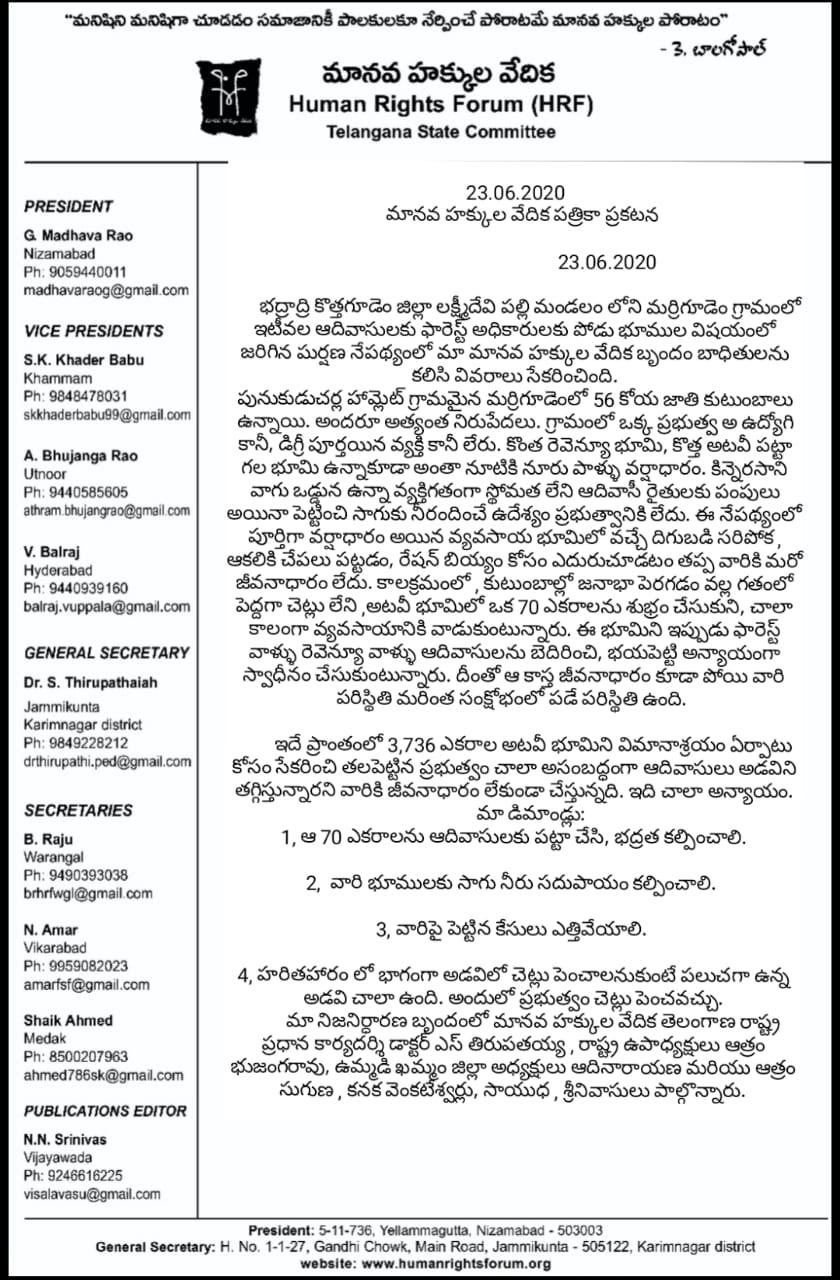 LG polymers did not have environmental clearance, alleges HRF

‘The company admitted that in a signed affidavit’

The LG Polymers India, the chemical plant belonging to South Korea-based LG Chem, did not have the mandatory environment clearance from the Ministry of Environment and Forests (MoEF) from 1997 to 2019, said member of the Human Rights Forum (HRF), here on Monday.
The plant, located in RR Venkatapuram in Visakhapatnam, was recently in the news for the wrong reasons, as 12 persons had died and over 300 were hospitalised due to leak of toxic styrene vapour from a styrene monomer tank.
Citing documents from the official website of the MoEF, V.S. Krishna, coordination committee member of A.P. and TS of HRF, said that the company in a signed affidavit submitted to the State Environment Impact Assessment Authority (SEIAA) on May 10, 2019, had admitted that the unit did not have ‘environment clearance substantiating the produced quantity issued by the competent authority for continuing operations.’ In effect, this means that the company had admitted that it was running operations that were patently illegal, the HRF functionary said adding that LG Polymers had, in a notarised affidavit, stated that they would not “repeat any such violation in future.”

According to Mr. Krishna, the company had also accepted that it had expanded the production of the plant and changed the product mix without obtaining the required environment clearance as authorised under the EIA notification of 2006.
The HRF also pointed out that the company’s expansion plan was reportedly listed under Category A, which mandates that an environment clearance was needed from the MoEF.

“But in a brazen act of violation, the company filed the application to AP SEIAA. But SEIAA in June 2019, transferred the proposal to the Centre. It is learned that the company’s proposal was delisted, as it did not intend to expand,” he said.

These acts have grave implications for people’s health and livelihood. The social and environmental impacts of the factory’s operations have never been evaluated, Mr. Krishna said.

Vizag LG polymers: HRF demands prosecution of the Company officials and all the concerned